An oft-heard critique of millennials is that they’re fickle—or, at the very least, far more youth-obsessed than our culture is, if YouGov BrandIndex’s July release of favorite brands is any indication. But older retailers and brands will find relief in the public-perception research firm’s latest survey, released today.

Unsurprisingly, Facebook and Netflix top the list of favorite brands for the past 12 months, with Facebook capturing a score of 83.5 percent and Netflix taking 75.8 percent. But the other three to fill out the top five? None other than Southern grocer H-E-B, Walmart and Victoria’s Secret, the latter springing from the ashes of shopping malls like a phoenix in Pink lingerie. 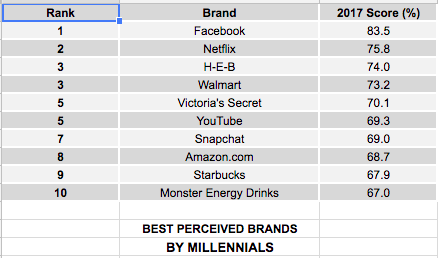 YouGov tracks 16 different measures of brand health across 32 markets around the globe, across thousands of brands.

This year’s ranking varies from last year’s report in two significant ways: It’s looking at millennials, versus a general population of adults over 18. Also, YouGov created separate distinctions for ad awareness, positive word of mouth (WOM) to and from friends and family, news, and buzz (which covers everything a millennial may have heard about a brand, good or bad, paid or not).

CEO Ted Marzilli of YouGov calls these terms “inside baseball” for the industry. “Brands and media agencies tend to think of paid versus earned exposure,” he explained. “Paid is generated from ads, whereas WOM is earned because it’s people being ambassadors, talking up your brand, not being paid to do that.”

The WOM metric was added to the YouGov calculus five years ago, at the request of clients who wanted more granularity on paid versus earned media.

WOM can be “an interesting metric because sometimes [a brand can rise the ranks] for the wrong reasons—like United in April, dragging someone off a plane,” explained Marzilli.

This year’s WOM metric looks at positive word of mouth, ensuring those in the top 10 are there for good reasons, not mixed ones.

“One way I can interpret that data is those are brands making life easier; some would say better,” Marzilli said. “If those brands rank highly among millennials in generating WOM, they fulfill an important need in people’s lives. What comes to mind for me is that it makes life easier or facilitates connectedness, or being able to purchase or share things.”

Netflix is among the best examples of a brand “leveraging the internet to make life easier,” Marzilli continued. “It’s become integral to how millennials, indeed the general population, lead their lives and consume content.”

But value is also a critical consideration, as Walmart and H-E-B demonstrate. “Walmart may be becoming cool again among a generation of millennials living more thriftily, who don’t have the same prospects as a generation 15 or 20 years ago,” Marzilli observed. “Value may play an important part of their lives. Amazon might play into that as well.”

H-E-B was a particular surprise entry, and became the topic of internal debate, Marzilli revealed. “All the other brands are national, if not global, brands with wide footprints, but H-E-B is a localized brand in the southern part of the United States.”

“Because we’re focused on millennials that have heard something positive about brands, then participated in WOM, our methodology essentially adjusts for a brand’s footprint,” he explained. “People outside H-E-B’s footprint have probably heard neither positive nor negative news, so those consumers are not included. It’s an outlier on the list because it’s not national, but it does show that H-E-B is doing a good job among millennials who’ve heard something about it.”

As for what H-E-B’s doing right, Marzilli hesitates to speculate. “Our data doesn’t answer all the whys, but it shows what is happening,” he said. “It could be product selection, something about the advertising, things they’re doing in the community that might resonate particularly well with a millennial audience.”

This marks the first year YouGov’s released a brand value study focused on millennials with a special focus on positive WOM. But because YouGov was already tracking the data, it was able to extrapolate what the 2016 list would have looked like, to better compare changes with this 2017’s list.

Notably, Facebook remained No. 1 on both lists but jumped 7.1 percentage points despite the barrage of negative press it’s received in recent months.

“This data is based on 12 months of scores,” Marzilli cautioned. Because of scrutiny over to what degree Facebook is responsible for enabling Russian agents to use ads to tamper with U.S. elections, “I suspect there’s been a down tick in Facebook’s positive WOM over the last month.”

Still, there is something to be said for both this downturn and the sharing economy at large.

“A lot of technology has both positive things that help people, but also has the ability to be misused,” Marzilli observed. “Facebook has been in and out of this discussion on privacy, and privacy settings for users, for five, six years. The data suggests that for the average millennial, it’s a positive factor in their lives. That doesn’t mean it’s perfect, but the positives perhaps significantly outweigh the negatives.”

Marzilli warned that this is a top-10 list that doesn’t account for all the 1500 brands YouGov reviewed—Uber, for example, is at No. 20 this year. “In the context of 1500 brands, that is still pretty good,” he added. “It’s not that Uber declined; it’s that other brands overtook it.” 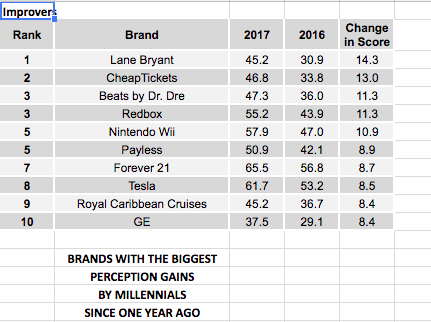 Half the brands that appear on the Most Improved list are also classic retailers, including Lane Bryant, coming in at No. 1; Payless at No. 5, and Forever 21 at No. 7. Royal Caribbean Cruises and GE are also not typically perceived as youthful.

“For the average brand, we looked at about one thousand interviews” over a year, Marzilli said. “The sampling margin of error is 2 to 2.5 percent, so changes in the score greater than that margin of error indicate a statistically significant improvement in the brand.”

For the retail heavy-hitters, he again pointed to value for money as a force that resonates with millennials—Payless, Forever 21 and Cheap Tickets come to mind. “For Cheap Tickets, my speculation is that the branding tells you what that service provides, and value is something I think millennials focus on,” Marzilli says. “It makes life easier for people to get shows and content they want to see.”

Meanwhile, “Beats by Dre, Tesla and other tech brands can be perceived as improving lives—Tesla by contributing to helping the environment as well.”

Marzilli took time to underline this point. “Sustainability and green are values that tend to resonate with millennials, and they’re gonna be on the planet on average a lot longer than people middle age or older,” he observes. “They may have a longer-term view in trying to protect the planet.”

Royal Caribbean, meanwhile, may surprisingly fall into the value for money camp.

“Cruise lines are historically viewed as for older people—making globetrotting easier—but those same characteristics can appeal to millennials,” he says. “That doesn’t mean all millennials are cruisers, but clearly there’s a subset. Convenience, or value? A combination of those two things is resonating.”

The big takeaway for brands

The biggest themes revolve around convenience and value for money, with heartening news for brands: You don’t have to be a new kid on the block to attract millennial attention.

“Millennials have influence on what the rest of the market buys; we’re a youth-oriented and youth-obsessed culture,” Marzilli said. “So it’s important for brands to understand what resonates with them.”

But don’t just think about millennials short-term needs; consider the long game, too. As Marzilli observed in the case of Tesla, environmental impact may be a concern because of how long this generation expects to live.

“Even though they’re resource-constrained and more focused on value for money today, it doesn’t mean they won’t be more affluent in the future,” he said. “They may grow into more upscale, higher-end brands. It’s important to think both ways: Immediate opportunity and influence on market purchasing decisions; also, that these young people will grow older and more affluent. Brands want to think about keeping them engaged so they don’t age out of their brand.”

Lastly, bear in mind the healthy mix of new and old brands that compile the ranking. “It’s not just about new brands. Even existing brands must think of new and different ways to continue adding value to people’s lives,” he concluded.

By Angela Natividad for Adweek

BMW’s Vision Motorrad Next 100 motorcycle is built for superheroes