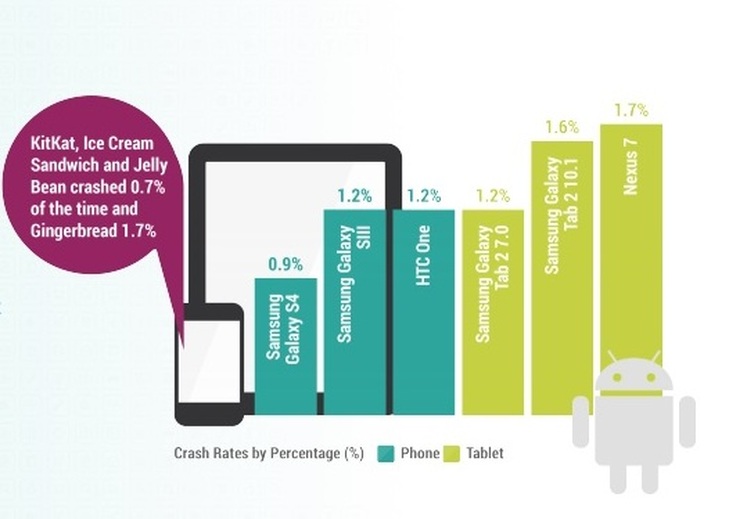 Published by STEPHANIE MLOT for PC Mag
If you’re still holding out on downloading your phone or tablet’s latest operating system, now might be a good time to take the plunge.

According to a new report by Crittercism, both the latest iOS and Android systems promise the fewest app crashes. Overall, however, Android apps tend to crash less often than iOS apps, the study found.

Unsurprisingly, the older the OS, the less stable it is: Google’s KitKat (4.4), Jelly Bean (4.3), and Ice Cream Sandwich (4.0) have a tendency to crash about 0.7 percent of the time, while apps running on Gingerbread (Android 2.3) end in an error 1.7 percent of the time.

Apple, meanwhile, sees the fewest crashes on iOS 7.1, which launched less than three weeks ago. Its predecessors don’t fare as well—iOS 6 crashes 2.5 percent of the time, and iOS 7 is at 2.1 percent.

Broken down by device, the iPhone 5 crashes the least—1.7 percent compared to the iPhone 5s’s 2 percent track record. On Android, Crittercism saw a 1.2 percent crash rate for the HTC One and Galaxy S III, and a 0.9 percent rate with the Galaxy S4.
Read more

What is the Deep Web and anonymous browser TOR?